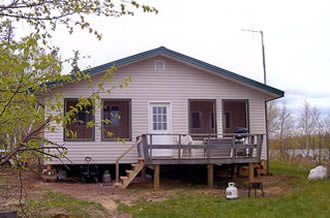 Mojikit Lake is another large body of water covering 14,000 acres and is connected to the Ogoki Reservoir by a narrow, navigable, channel. As part of the Ogoki Watershed, Mojikit Lake is noted for its perfect natural fish habitat offering huge catches of larger walleye and monstrous northern pike. This is the only camp on this large lake. The camp consists of a large two bedroom cabin located in a unique protected lagoon. This camp is suitable for groups of 2 to 9.
< Learn More
Next Camp > 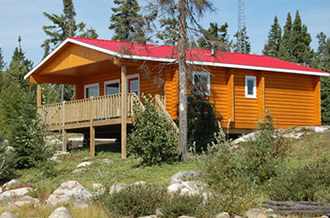 This camp is located on an isolated arm of the Ogoki Reservoir known as Short Lake which was one of the three lakes that where combined to form the reservoir. Walleye are abundant averaging 3½ to 4 pounds and northern pike up to 25 pounds. This is a very popular camp offering a large three bedroom cabin in an isolated location with access to a massive body of water covering 35,000 acres and hundreds of miles of shoreline. This camp is available for groups of 4 to 10.
Learn More >

Weese Lake feeds into the Attwood River system and covers almost 3900 acres with over 30 miles of shoreline to explore. Weese Lake is the largest of our six most northerly single cabin lakes. From this lake you also have access to trout fishing in the Weese River.

At this camp we have a large modern 2 bedroom cabin with a large deck.

This cabin is suitable for groups of 6 to 10 for 7 day trips (Sunday to Sunday).

What You Should Bring:

Party members are restricted to 150 lbs. of baggage each (including groceries & refreshments) for fishing and 175 lbs. each for moose hunting.

Read what our guests have to say...

Rates are quoted per person in


Also be sure to visit: Ogoki Reservoir Deluxe Wilderness Lodge